Siraj Technologies Ltd. is celebrating its first anniversary. When we launched in April 2017 in Be’er Sheba, our goal was to spend our first year building a highly technological company that employs mainly Bedouin professionals from the ground up. We are proud to say that we have accomplished this objective.

The major milestones we achieved this year include:

a social enterprise, we take pride in our role of incubating a Bedouin tech community in Be’er Sheba and the surrounding areas. This year, we initiated inspiring, tech-focused events targeted at the Bedouin community, including professionals, college and university students and graduates, and high-performing high school students. Notable events include an introduction to IOT, and a well-attended meetup with the first employee of Waze, Fej Shmuelevitz. The impact of the interactions generated by these meetings – a Bedouin high school student conversing with one of the founders of Waze – can be a career defining moment for the individuals involved.

These community building events highlight Siraj’s social mission, of connecting between Israel’s hi-tech industry and the Bedouin community. Our offices are located in Be’er Sheba, and our recruitment efforts center on hiring Bedouin professionals. However, recruiting such talent is a major challenge since a very small number of Bedouins study STEM subjects at college and university, and those who do often require additional training. 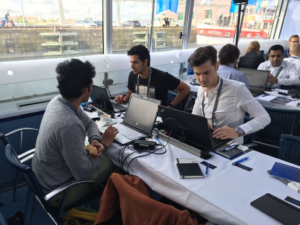 Siraj engineers at the Minds & Machines Hackathon in Berlin, June 2017

We have been aware of this challenge since our establishment, and for that reason Siraj Technologies, starting in 2018, is operating in close partnership with the Siraj NGO, “Siraj: Advancing Hi-tech in the Bedouin Community”. Now that the feasibility of a highly technological Bedouin company has been established – it is time to expand! The Siraj NGO, which formally launches operations in 2018, sets out to meet hi-tech recruitment challenges in the Bedouin community by establishing a candidate pipeline of Bedouin engineers for Siraj Technologies and the Israeli tech industry.

Siraj NGO recently completed building its Board of Directors that will be led voluntarily by Aharon Fogel, who served for many years in Israel’s Ministry of Finance. Other members of the board include Fadi Elobra, a leader in the field of workforce development in the Bedouin community for over a decade, and Hanan Alkirnawi, a social worker who has managed programs for at-risk youth and employment programs at the municipal level. 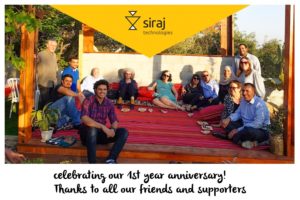